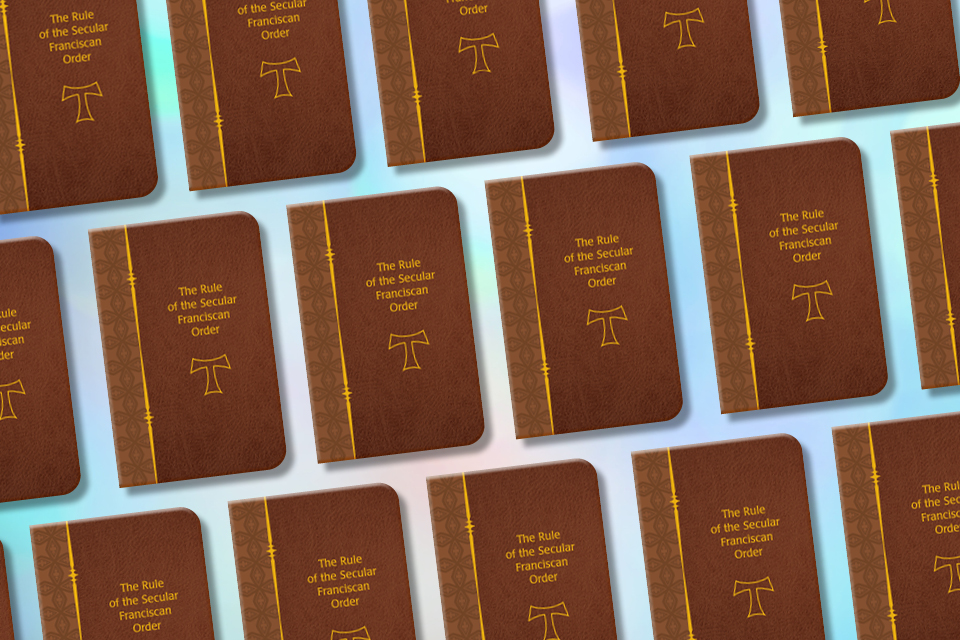 The little brown book was the final touch and “show stopper” to a project that started in August 2021.

My client, Jan, showed me an existing pocket-sized prayer book, The Rule of the Secular Order. The cover was laminated on a red-paper stock with gold-foil stamping. Jan had an upcoming conference in August 2022 and hoped to have the book redesigned in time for the event. She wanted something special, and I had a year to design and print this book.

We originally met in my garage where I showed her many different paper samples. There was a plethora of choices—some with foil stamping, others with varnishes, and several with a combination of both.

Book design started soon after our meeting. I showed Jan two cover ideas. Each layout had a brown background (their brand color) with gold-foil stamping. Similar to an old-fashioned book, the spine’s decorative pattern was wrapped around the front and back. The book title was done with gold-foil stamping. Jan liked the ideas and showed them to her team.

Time started to zip by quickly. I contacted Mark McCabe at Modern Litho to quote the project. Modern Litho is an excellent printer that could handle this type of project with special finishes. Throughout the year, Mark quoted the project several times because the paper stock changed, the page count changed, or the quantity changed.

We knew we wanted extras, more than just a printed cover. “Let’s do a laminate and gold-foil stamping,” I suggested. Then, I added another detail: a spot-gloss raised UV over the decorative pattern. Jan was dubious, but I knew it would make the book cover really pop. [Spot UV is a flat finish of a shiny layer that goes on the exact spot where you want your printed piece to have an area of a high-gloss coating.]

Mark sent us printed samples with spot-gloss, raised UV. One sample immediately stood out: it had the spot-raised UV and a soft-touch laminated finish. “That’s the one I want,” Jan said when she felt the soft-touch laminate. I contacted Mark again to requote the project.

The interiors of the book were in black-and-white text. As with all book projects, there were many rounds of editing after the initial layout.

There was a small glitch as we were getting closer to the deadline. Jan’s old small, red book was 3×5 inches. I had set up my files for that size. After the layout was completed, Mark informed me that the bindery could not produce that size, so both the cover and the interior files were changed by a half-inch to 3.5×5.5 inches.

Overall, this project required a watchful eye. We had to make sure the spine width and layers were accurate for the printer. We saw and approved proofs before the book was printed. I was anxious about the cover and elated when Modern Litho sent me a press sheet prior to the bindery. It was GORGEOUS!

Over my thirty-plus-year career, this was the first time I was able to design a project with so many extras. It’s rare when a client is willing to spend for these special finishes. This little brown book would be a keepsake. I was honored to be the designer.Jan and her son picked up the books. They were thrilled with the finished product, which is what I call a happy ending. The books were sold at the August conference and according to Jan, “Based on the comments and the folks lined up at that table during every break, they were a huge success and VERY well received!”

By the way, there were other parts of this venture: Spanish and Korean versions of the book. I contacted Mark to tell him about the upcoming projects. Mark told me, “Even the bindery guy was really impressed.”

Publishing a Memoir of Love and War
September 8, 2021