An urgent text message came from one of our clients as we were driving to our son, Oliver, to college in New Orleans. Vicky needed a black and white Busch Stadium logo ASAP, as in today. We switched drivers while Gary accessed the Major League Baseball website for the correct file.

No luck. All of the files were in color. Gary’s B&W version was back in St. Louis on his computer. Oliver said he had the PDF in color on his laptop, which could be opened and modified in Adobe Illustrator. But how to send it to Vicky was the question. I said, “You need wi-fi. Let’s stop at Starbucks.”

We had just reached Jackson, Mississippi. “Quick! Look up Starbucks locations on your iPhone,” I said. Gary found one right away. “Turn off at this exit,” he instructed. The map led us to the front of a Target store, and we realized that this Starbucks was inside (combined with Pizza Hut). So, we parked the car and went in with Oliver’s laptop. 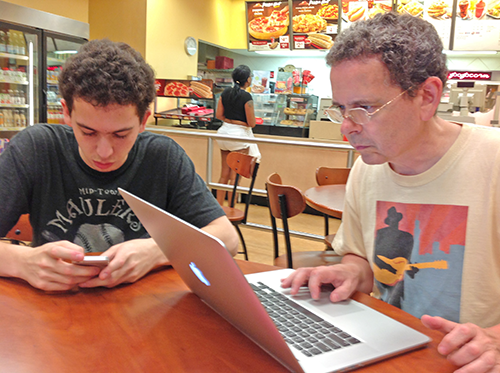 the counter. “Yes,” he said and joked it would be $20 per hour. We laughed and sat down. “This will only take me 10 minutes,” said Gary. Sure enough, it didn’t take long and Gary emailed the B&W file to Vicky via Oliver’s email account.

Then, he followed up with a phone call. “The file is coming from Oliver’s computer. Please let us know when you get it,” Gary told her.  Vicky called a few minutes later relieved and full of compliments. “You Kodners are the best!” she said. Moments later, we were back on the road.

In this case, we were able to help our client, even though we were hundreds of miles from our desktop computers. It may not take a village, but sometimes, it does take a tech-savvy team to solve a client’s pressing problem in a matter of minutes. Put the Nehmen-Kodner team to work on your graphic-design problems.

What you should know about sending large files
November 30, 2016