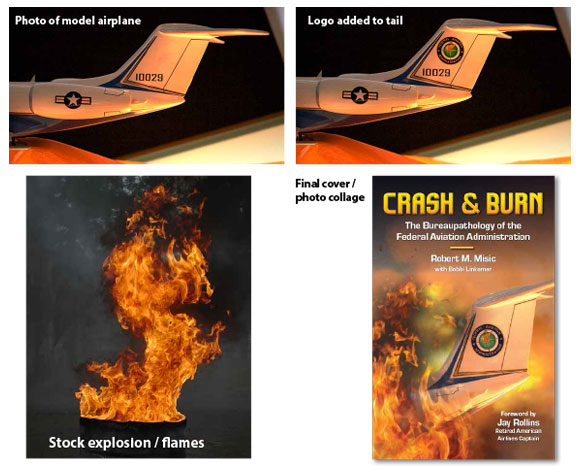 Author Rob Misic hired to us to design a custom book cover and interior layout. His topic was an expose of the FAA, and his cover concept was to use a specific airplane with an FAA insignia on the tail. He sent us several images he had downloaded from the Internet.

I briefly explained the difference between image size and resolution requirements for the Web and for print. “These images are low resolution,” I told him. “They don’t have enough pixels and are too small for high-quality printing.”

I asked, “Who owns these images? They are probably copyrighted, and we do not recommend using specific photos without permission.”

What to do…?  I asked Rob if there was a possibility of taking a photo of the plane he had in mind. Probably not, he said. It would be too hard to get permission, especially considering the nature of the book he was writing.

Our plan was to use only a small portion of the airplane. With that in mind, Rob kept sending more Internet images. He was looking for the largest pixel size possible.

My next idea was to search Flickr and contact the photographers for permission to use their photos.

Then, a light bulb lit up in my mind. What about a model airplane? That way, we could shoot a close up, and the image would be ours … no strings attached. I got the idea from a project N-K had designed many years ago, when we photographed a model of an old-fashioned gas pump for a company brochure.

Success! Rob found a high-quality model airplane online and had it shipped to our office. We took a close-up photo of the airplane’s tail. Our photo was top quality, but we went a step further by making it look like the plane was on fire. This worked for two reasons: The title of the book was Crash & Burn, and the subject matter was highly incendiary. We liked the effect, and Rob was extremely pleased with the cover design. He now has the model airplane at his office.

An email inquiry from an author
October 7, 2020

Publishing a children’s book and using a book designer
June 13, 2020