The First Challenge: Choosing a Name
Creating a new brand identity for two St. Louis legacy congregations that were merging into one is no easy task. After more than a century, members of each congregation had become identified with their name, image, building, and even seat location.

The two congregations, Brith Sholom Kneseth Israel and Shaare Zedek, deliberated for four years before they joined together. Their combined names would be too long. An acronym was also out of the question. Most members of the naming committee initially favored borrowing one word from each congregation (Shaare Shalom) but eventually the committee’s co-chairs recommended that the Board choose a wholly new name for the synagogue.

At every step of the merger process, the leadership of the two legacy congregations stressed that they were not simply combining two entities but were creating something completely new. The name needed to coincide with this philosophy and represent the creation of a new entity.

Every aspect of the new synagogue—location, personnel, ritual practice, governance, and vision for the future—had to be considered afresh, in light of present circumstances and a desire to create a vibrant new shul (synagogue) that would endure for the next hundred-plus years. Indeed, the mission statement of the new congregation describes it as “The new spirit of Conservative Judaism in the Midwest.”

The proposed name, Kol Rinah, was intended to be a constant reminder that future decisions will be based on reasoned analysis, a shared sense of yiddishkeit (the Jewish way of life), and the courage of our convictions, not merely because “my old congregation did it this way.”

The following considerations informed this recommendation:

The name, Kol Rinah, was accepted and approved by the Board. An immediate press release stated “Congregation Kol Rinah embodies the new spirit of Conservative Judaism in the Midwest. It radiates the joy of worship, learning, and Jewish music into our souls and out to the families, friends and community. Come pray, learn, sing and celebrate with us.” 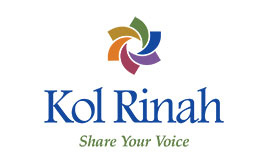 The communications committee was charged with creating the new logo and graphics. The committee evaluated a number of preliminary designs that were submitted by three different graphic designers. Some images emerged as being important to the goal and identity of the new congregation:

Following a series of votes, graphic versions, adjustments, three logo design finalists were presented, and the board chose this final mark.

Talk to N-K Creative about your brand identity objective and concerns. We’re up for the challenge and ready to offer solutions.

Expense is an important consideration
February 19, 2015